Two of Aquabatix’s beautiful mermaids performed in a purpose built casino called The Ace Club for the launch of the new black badge model for Rolls Royce in Shanghai. 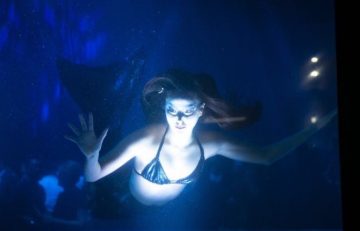 The extremely sophisticated event was themed in black and along one side of the casino was the tank. The tank was dressed to look like it was a window in the wall. No one could tell it what was behind that window until the lights flashed on to reveal a mermaid floating underwater behind the glass. Many guests rushed over to the glass immediately to start taking photos staring in amazement at what they were seeing.

The mermaids, who had black tails, mesmerised the guests for 15 minutes, performing underwater in the tank to a mix of music tracks. The Aquabatix performers took it in turns to pose, flip their tails and move underwater to the music, occasionally linking up to perform together to the crowd’s delight. 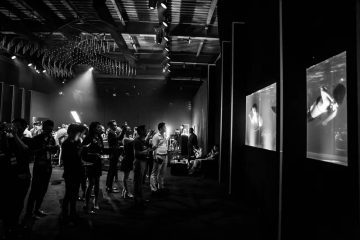 Aquabatix became the highlight of the event, which also featured Russian ballet dancers and pole dancers plus a magician from London. The client said that “the mermaids did an amazing job”.

The Rolls Royce black badge launch is the second car launch in China that Aquabatix has been involved with in 2016. Back in May, a troupe of girls performed for the launch of the BMW X1 Li model in Xishuangbanna.