Adidas: Beyond The Surface underwater campaign

Brief: Adidas Beyond the Surface Campaign. To capture the media and public attention with an underwater campaign in the Adidas ‘liquid billboard’ to support the launch of the global ‘Beyond The Surface’ film which celebrates how water accepts everyone unconditionally. The product relates to inclusive performance swimwear for women whatever their shape, ability and religion. campaign film in the UAE, Middle East region. The campaign is part of the Adidas wider Watch Us Move’ initiative. 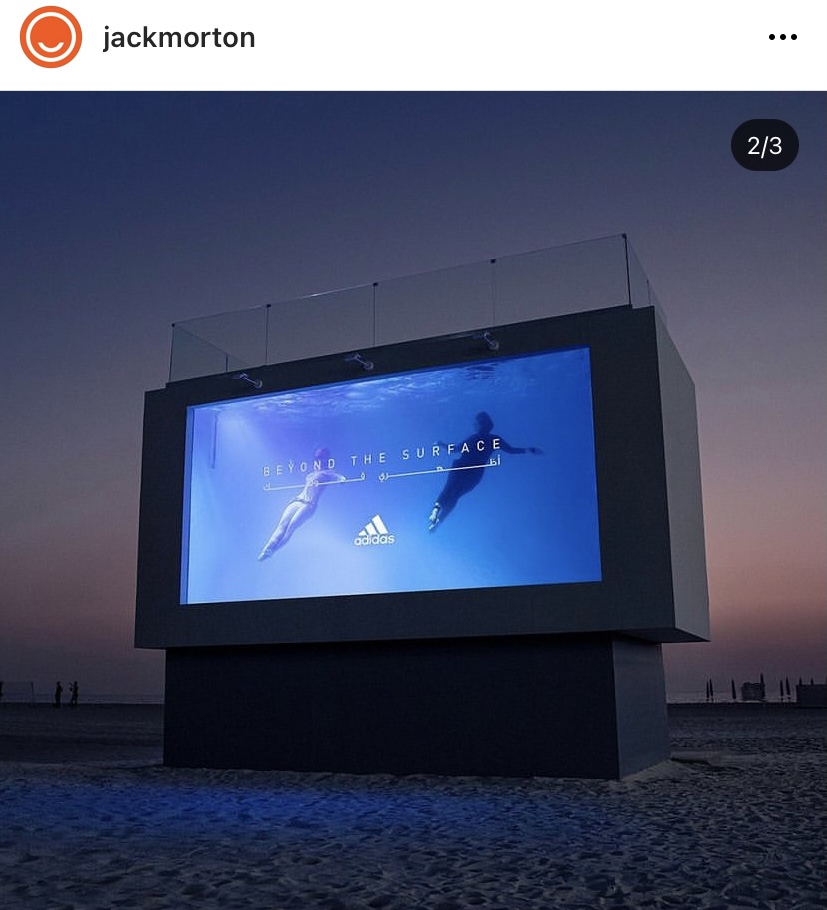 Aquabatix Execution: Havas Middle East and Jack Morton created a billboard you could swim in for Adidas to make a splash with by connecting the film to social influencers and the media. The liquid billboard, which was constructed on one of Dubai’s most popular public beaches, stood a stunning five metres high and was three metres deep. The structure was made from reinforced transparent acrylic and held 11500 gallons of water, which is the equivalent to almost 163 bathtubs. The billboard was not only used in an immersive experience for women all over the city invited in to take a dip in the campaign, but used to capture the media’s attention which is where Aquabatix jumped in. Aquabatix had two highly skilled synchronized swimmers, who were both based in Dubai, on the project, performing underwater routines over two days for both media and the public but also being shot for video and stills content that Adidas then used to highlight their campaign. 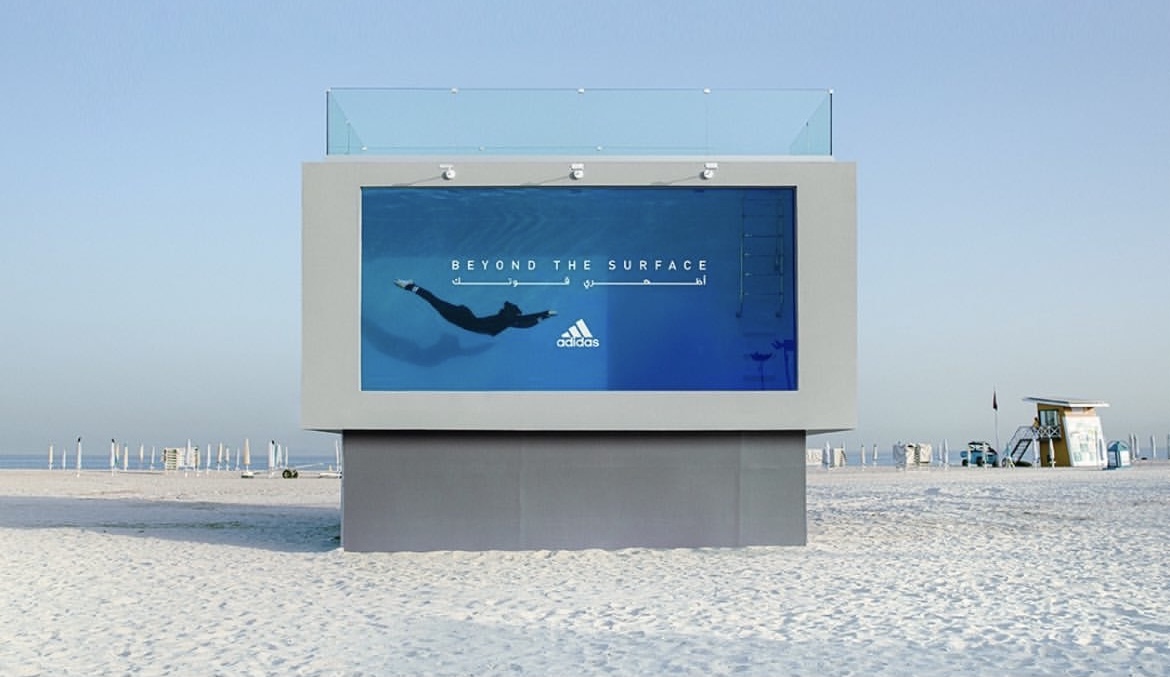 Aquabatix, who had created the Britain’s Got Talent finalists, underwater act, Aquabatique, and performed underwater shows in a residential contract with Yas Waterworld in Abu Dhabi, produced two underwater routines for this event. The rehearsals took place in a swimming pool and then in the tank itself. With the music being able to be heard underwater due to an underwater speaker, the performers could stay in synchronization with eachother. The choreography included some interesting body shapes, spins and movement in all directions to show off the swimwear and the ability to move freely in and under the water whilst wearing it. The underwater shows were used to capture the attention of the public nearby, with loud music and visually captivating underwater dance going on within the tank to make people stop and look. Stills and video taken from the performances were also used in the media, with such a unique concept on a beautiful beach, during the day and sunset. The synchronised swimmers were also filmed by Adidas, using underwater cameras and drones, diving into the water and swimming and moving gracefully underwater. This was used by Adidas on one of the world’s largest digital billboards in the Dubai mall over the ice rink next to the Adidas store. A similar initiative was used in 2013, by the Nivea Dare To Dip campaign, again with Jack Morton, that used a tank from Aquatic Impact, set up in London’s Covent Garden with Aquabatix performing underwater to attract the public attention. Aquabatix were delighted to be working again with Jack Morton and Havas Middle East for another huge global brand. 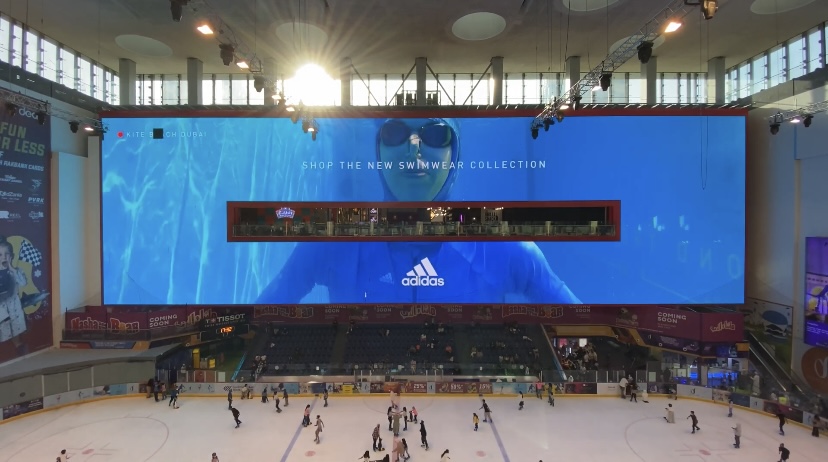 Result: Within the week, the billboard started a global conversation about inclusivity in swimming, across more than 50 countries with a reach of 295 million and $1.35 million earned media. 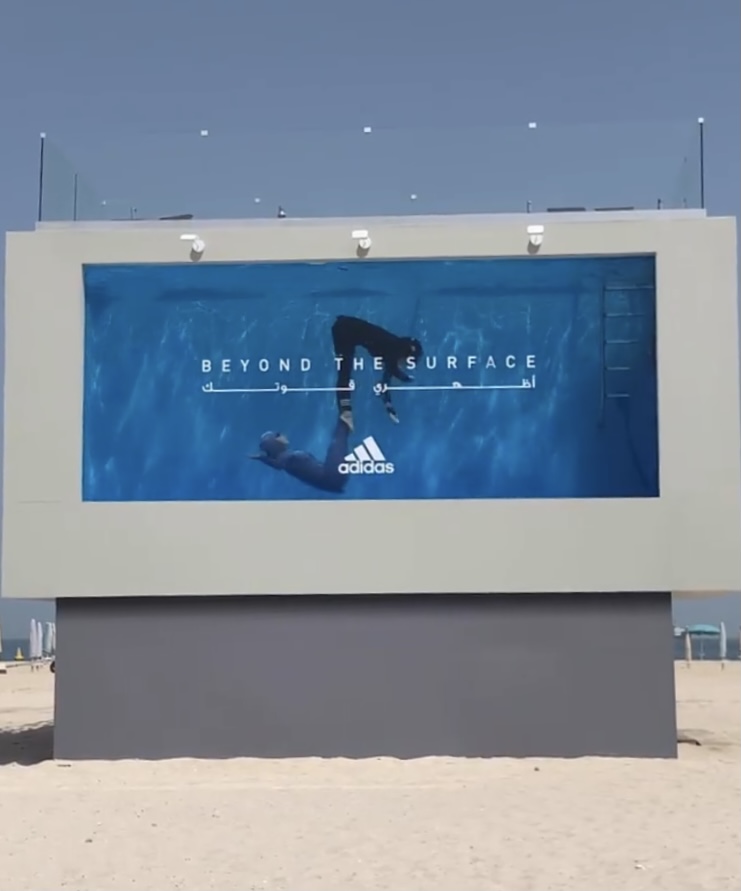 The campaign earned coverage in over 200 fashion, lifestyle, travel and industry publications across 35 countries. Jack Morton featured the Adidas Beyond The Surface campaign as a feature in their experiential event trends for 2022 publication. The campaign won 4 MEPRA awards.

To have Aquabatix help you capture the world’s attention, please contact us info@aquabatix.com