Kallaway, a London based PR and sponsorship firm, instructed Aquabatix to create choreographed sequences with held poses using synchronised swimmers in the M&G garden pond at the prestigious Chelsea Flower Show to achieve an eye catching images for the world’s media to highlight their client’s brand. They wanted to engage with lifestyle press, bloggers and Instagrammers to take the story beyond the gardening pages. The garden, which was designed by Jo Thompson, was competing against several other gardens including HRH Prince Harry.

Aquabatix worked closely with the Kallaway team on creating a set of flowing poses for the photographers to capture eye catching images. 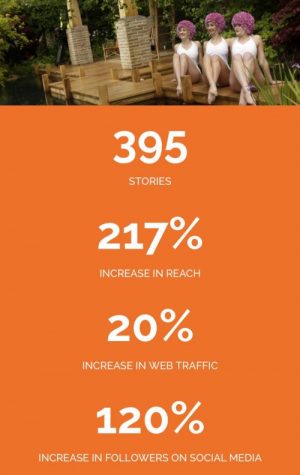 The BBC lunchtime news went live during this time in order to have the girls in the background whilst they broadcasted from the event. Within two hours the British national paper, The Guardian, led with the M&G Garden as their headline online from the Chelsea Flower Show with an eye capturing image of the girls in the pond. Prince Harry, who was also at the show, was mentioned towards the end of the article.

The following day the world renowned British paper, The Times, had the image taking up half of their front page. The image along with mentions of the garden also featured in Vogue, the Daily Mail, the Daily Express, the Independent, the Telegraph and several online newspapers worldwide including the Australian and the New York Post. The image also made the Guardian’s online photos of the day.

Overall the PR campaign generated over 395 stories with a potential reach of 2.23 billion. They broke new digital ground with shareable social content which contributed to a 20% increase in web traffic to the brand plus gained 120% increase in social media followers, all of which helped M&G sponsorship bloom.

Kallaway were delighted with the result and said

“Aquabatix stole the spotlight for us and our client at the RHS Chelsea Flower Show this year, helping us to make a splash in major news outlets around the world.”