Representing Team Blue, Will Young took to the pool first performing a dramatic routine to ‘Hall Of The Mountain King’ showing fantastic synchronisation, arm movements and formation changes with his team of Aquabatix girls.

With Will scoring 8’s across the board, Russell Kane strutted onto the deck, in front of the two and a half thousand strong audience, knowing he would have to go all out to take the title. Russell and his team channelled their inner Pussycat Dolls to ‘Don’t Cha’ with attitude, sass and a highly impressive lift where Russell cleared the water.

The judges were won over with Russell’s artistic flair and awarded Team Red first place scoring the competition’s only 10.

See which routine you would have scored top and how the celebrities trained for the big occasion.

All was shown live on BBC One as part of their Sport Relief coverage, with the total raised standing at £55,444,906. To make a donation please visit www.sportrelief.com 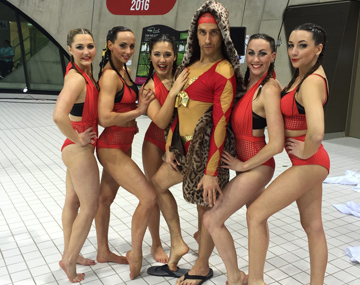